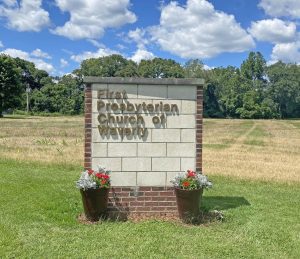 Mike Milam saw a need. Low-maintenance landscaping would save time and money. It would combine an educational opportunity with a spot to walk and relax in nature. With the help and approval of others, his vision is coming to fruition.

For 18 years, Mike has mowed four of five acres on the First Presbyterian property. At 77 years of age, he started looking for an alternative. Through his research, he settled on a solution. Create a pollinator habitat. The answer that he found involves working with community leaders and businesses.

Trailblazers, like Mr. Milam, do their homework. His role as church treasurer made him aware of the financial capabilities of this congregation. He knows the patterns of their pre-existing obligations. He is in touch with their vision for the future. Hiring commercial mowers for one year would cost anywhere from $4,000 to $6,000 at current rates. In contrast, the pollinator habitat’s annual upkeep cost would be less than $500 after creation. Local Boy Scouts will build benches. Walking paths are a part of this plan. Implementation compelled this innovator to find certain skill sets beyond his own.

Taking on a job like this requires partnering with learned people. The plan’s execution consists of a detailed calendar of events. Dirk Dempsey, the Agriculture and Natural Resources Educator for the OSU Extension Office in Pike County, has been an invaluable resource. His technical guidance on this project assures smooth sailing every step of the way. The Pike Soil and Water Conservation District sampled soil. Top lawncare provider TRUGREEN spread herbicide in June to kill pre-existing non-native grass. This application will repeat in October and next April to create a clean slate. 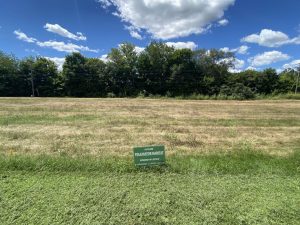 As invasive green grass is now brown, Mike highlighted this area with the purchase of 15 signs highlighting the coming gift to the community. These signs announce the future. Next April, planting of wildflower and native plant seeds should happen. By summer, we should all be able to see project completion, plants growing and blooming there. Initial labor will be complete.

First Presbyterian’s idea to transform just grass into a pollinator magnet makes sense. Douglas Tallamy, a professor in the Department of Entomology and Wildlife Ecology at the University of Delaware, has written several books on this subject. Starting with Bringing Nature Home: How Native Plants Sustain Wildlife in Our Gardens in 2009, Tallamy’s voice asks for more native species habitat where we live, not just in parks and preserves. According to Southern Living magazine, transforming manicured lawn into a native plant populace was a 2021 top garden trend.

Waverly’s First Presbyterian Church is a church seeking to serve the community while saving time and money at the same time.

Other writers agree. Teresa Odle and Nina Malkin co-establish on bobvila.com, “Native plants require less fertilizer, water, pesticides, and overall care than plants brought in by settlers. To learn what will thrive in your neck of the woods, type “native plants” and your state into a search engine — you’ll find tons of info.” Katherine McLaughlin, architecturaldigest.com writer, notes that “Native plants have developed a symbiotic relationship with the wildlife in the specific environment for thousands of years…With perennials, you only have to plant them once (that’s less work in itself), and they come back year after year.”

People in the area are learning about one church’s latest idea. Those in our area who understand that we need to protect and preserve biodiversity are paying attention. Biodiversity is the variety of life. Conservation is key. First Presbyterian plans to make demonstration plots available for public education. The habitat will set an example for promoting the development of other future pollinator habitats. The church plans to invite beekeepers to set up hives at this location. 4-H and other school groups can perform studies and/or grow milkweed for Monarchs. Local youth groups could build and install bluebird boxes. Monitoring would enhance that effort.

Mike Milam and First Presbyterian are not the only ones in this area changing things for the better. The Village Council of Waverly has sought an ODNR NatureWorks grant this year. If approved, some money will allow native prairie grasses and wildflowers to replace the grassy mowed lawn at Bristol Park.

Up on a hill not far from Kroger, big changes are taking place. A man with a plan got it started. He worked with others. He reached out for help as needed. Others came to his aid. Using their skills and talents, they supplied his needs. His idea, a team effort, is materializing. These game-changers and area resources are what make our community a great place to be.